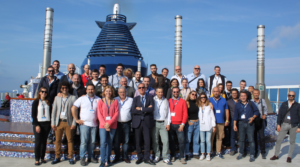 From 29Th September to 2 of October the Escola Europea MOST will arrange  a new edition editions scheduled for professionals coming from Italy and the Iberian Peninsula, respectively. The aim of the MOST Management courses is to offer complete and concise training in intermodal maritime logistics, short sea shipping services and the motorways of the sea. The courses aimed at professionals combine lectures, workshops, terminal visits, navigation and networking. The course participants begin the theoretical training in intermodal transport and logistics at the headquarters of the Escola in Barcelona, and then board a Ro-Pax vessel of Grimaldi Lines en-route to Civitavecchia to continue the training along the short sea shipping route. The Port of Barcelona, the Ports of Rome and Grimaldi Lines, three of Escola’s five founding partners, collaborate in the organisation of the upcoming courses in September and October. While MOST Italy will also be sponsored by Alis, RAM Spa, Assoporti, Confitarma and AssArmatori , MOST Iberia is co-sponsored by the Spanish State Ports (Puertos del Estado), the Spanish Shortsea Promotion Centre and the Portuguese Shortsea Promotion Centre–Intermodal Portugal. The teaching staff will comprise professionals from the European transport sector as well as academic experts.

From 29 September to 2 October, the European Escola – Intermodal Transport will organize a new edition of the training course relate the Motorways of the Sea (Motorways of the Sea Training-MOST). The objective of the MOST Italy course is to offer a complete training regarding the intermodal maritime logistics, short sea shipping services. The course has been designed for professionals and students of logistics and transport  sector and for international business. The participants will meet in Civitavecchia to begin with theoretical lessons on intermodal transport then they will be embarked on the ro-pax ferry “Cruise Barcelona” of Grimaldi Lines and will continue the training along the short sea shipping route between Civitavecchia and Barcelona .

“Excellent lessons, the teachers knew the main issues of logistics  and shor sea shipping. It was an honor to learn from their experience “: one of the participants commented his experience after the 2017 edition.