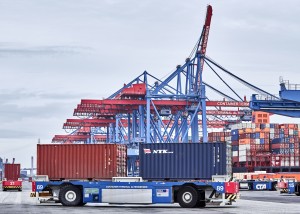 This is according to the findings of the Battery Electric Heavy Goods Transport with Intelligent Container Terminal Operation (BESIC) research project.

The project has transformed the HHLA Container Terminal Altenwerder (CTA) which now has ten heavy goods vehicles running on batteries that are charged with surplus green power.

“I am so pleased that at Altenwerder, we were able to demonstrate that an intelligent charging strategy can lead to significant savings in operating costs,” explained Boris Wulff, BESIC project manager at HHLA CTA.

He continued: “This paves the way for related areas of application, such as running electric busses in the public transport network or battery-operated apron vehicles at airports. BESIC has thereby enabled us to make the innovative contribution to the energy transition that we had hoped for at the start.”

BESIC ensures that the batteries in the charging station are always charged at the optimum time from an environmental and operational perspective by exchanging data with Vattenfall’s load forecasting systems and the CTA terminal management system.

It has also shown that the battery-operated automated guided vehicles can be operated more economically than diesel/electric AGVs.

The cost of purchasing battery-operated AGVs including battery and charging station are higher, but this will pay off over the following years due to lower energy and maintenance costs.

Dr Oliver Weinmann, managing director of Vattenfall Europe Innovation GmbH, said: “The energy transition is meeting Industry 4.0. As part of the BESIC project, we have developed and implemented an automated system concept with which HHLA can capitalise on its demand flexibility in the energy market and affordably charge its vehicles.”

He concluded: “What worked exceptionally well at the CTA is now available to highly automated customers throughout Germany.”