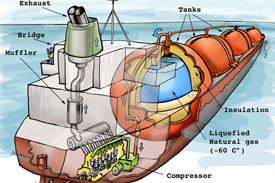 The European Investment Bank (EIB) is providing a €124m loan to Fjord Line for the expansion of its fleet, starting with two new LNG cruise ferries.

Delivered earlier this year by Bergen Group, the ferries, Stavangerfjord and Bergensfjord, operate between Bergen, Stavanger, Langesund (Norway) and Hirtshals (Denmark). Thanks to this recent investment, each of the new vessels offers daily services for up to 1,500 passengers and 600 vehicles.

Peter Frølich, chairman of the Board of Fjord Line, said: “The EIB’s involvement is recognition of Fjord Line’s commitment to sustainable sea transportation between Norway and the EU. We are proud to be the first Norwegian maritime transport company to have signed a loan agreement with the European Investment Bank. The loan assures us long-term financial resources at a lower cost, thus providing financial value added for Fjord Line.

Fjord Line’s new ferries are both 170m long and have a deadweight of 3,900 tonnes. They have been built to the highest international and European environmental standards and are equipped with four LNG-fuelled engines with 12 cylinders that produce 5,400 kW of power.

The application of clean technology will significantly reduce emissions, with the reduction of CO2 emissions reaching up to 23% compared to standard marine engines powered by heavy fuel oil.

In 2015, new and stricter sulphur regulations will enter into force in northern Europe. The LNG engines will allow Fjord Line to meet these standards with a large margin. When moored, the vessels use auxiliary engines that run on diesel, however, these engines are fitted with powerful catalytic converters that also reduce NOx emissions to about the level of the LNG engines.

“As they have also increased the capacity deployed on the routes between Norway and Denmark, this investment will contribute to the EU policy of promoting short sea shipping – a transport mode which is highly efficient not only in terms of environmental performance but also as regards energy efficiency,” added Mihai Tănăsescu, vice president responsible for lending in Norway, EIB.