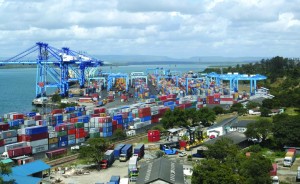 In the minds of many, East and Southern Africa including the Indian Ocean islands form an insignificant trade area. That may be true if comparing it with high volume areas such as the Far East. Yet, this region’s combined port throughput approaches 8m teu, technically more than the whole of the Australasian continent. And then, there is more scope for growth.

Imagine that the East and Southern Africa container trades caught up in one year’s time with that of the USA with its population of 323m. In that case, the relevant African container volume would grow to 42m teu, up 1,200% from the 3.2m teu of 2014. A period of 25 years may be more realistic which would then translate into a compound annual growth rate (CAGR) of nearly 11%!

That may be a bit exaggerated, but combined East and Southern Africa including the Indian Ocean Islands have seen full container volumes growing by a CAGR of over 9% since 2010. This backed up by the value of their merchandise trade expanding by more than 26% to US$385bn over the same period.

Preparing for a buoyant future, many ports in the region are ramping up both their marine facilities and inland connections, which constitute a lifeline for eleven landlocked countries.

Mombasa in Kenya, which expects its current 1m teu throughput to double by 2020, is building a new 1.2m teu container terminal, after recently expanding its existing one.

Its rival for various inland destinations, Dar-es-Salaam in Tanzania, has longstanding plans and a long shortlist of no less than ten companies to build a new, 600,000 teu box facility, doubling present capacity. In addition, some multipurpose berths will be strengthened to handle containers.

In addition to their main ports, both countries are ushering in their smaller secondary outlets. The main ones are Lamu in Kenya and Bagamoyo and Mwambani in Tanzania. These could become the starting points of multi-billion dollar transport corridors which will include port facilities, roads, railways, pipelines and warehouses.

China Merchants (Holding) International and Oman have jointly funded US$11bn to build a 20m teu capacity container port at Bagamoyo, opposite Zanzibar and 75 km north of Dar-es-Salaam. However, preference may be given to the port of Mtwara, near the border with Mozambique.

The largest Indian Ocean Islands port is Port Louis on the isle of Mauritius. Mauritius Container Terminal at Port Louis is expanded to accommodate 1m teu by 2025, around double the present volume of which 55% is transhipment.

Various ports in Mozambique, including Beira, Maputo and Nacala, are competing for trade with landlocked Zambia, Zimbabwe and Malawi, as well as with South Africa’s heavily industrialised Gauteng, accommodating the capital of Johannesburg.

South Africa’s Durban is the largest box port of Sub-Saharan Africa. The building of a new, 9.6m teu capacity port at the site of the former airport is to start by 2021.