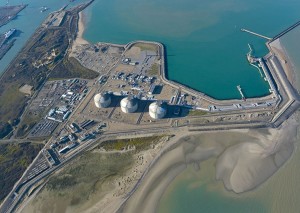 Commercial operations started up at the Dunkirk regasification terminal which is used to import, store and regasify liquefied natural gas (LNG) before delivery with the transmission systems to the places of consumption.
The Dunkirk regasification terminal is the second largest in mainland Europe and is directly connected to two consumption markets, France and Belgium.
Marc Benayoun, executive director of the EDF Group, said: “I am delighted that commercial operations have started up at the Dunkirk regasification terminal, thus creating a new point of gas importation in France and strengthening security of supply in Europe”
He added: “It also contributes to the development of the gas supply market, on which the Group already operates with its Italian subsidiary, Edison, and wishes to further strengthen its share. I would especially like to thank the EDF, partners and contractor’s teams who have worked together since 2012 to complete this strategic asset.”
The regasification terminal is located within the enclosure of the Dunkirk harbour on a site of 56 hectares. It is composed of jetty that can receive up to 150 LNG tankers per year and three isothermal LNG storage tanks, that can each contain 200,000 m3.
Due to reduced greenhouse gas emissions and absence of fine particles, natural gas has lower environmental impact than other types of fossil fuel, such as oil and coal.
It contributes to energy transition providing a useful complement to carbon-free nuclear power and renewable energies, especially during peak consumption.
Natural gas also has a promising future as transport fuel. In liquefied form at -162°C, its volume is reduced by 600 times, thus facilitating transport and storage. LNG is the choice alternative for long-haulage trucks and maritime navigation, where stricter standards are applied in certain seas.
Pascal De Buck, CEO of Fluxys, added: I would like to congratulate and thank all the teams who have contributed to the success of this extensive infrastructure project. At Fluxys, we are especially proud to have been able to contribute by bringing our 30 years of expertise in the field of LNG to the construction of this terminal.”
He concluded: “In addition, direct connection of the Dunkirk LNG terminal to our Belgian network provides users with easy and flexible access to the natural gas consumption markets in North-Western Europe.”