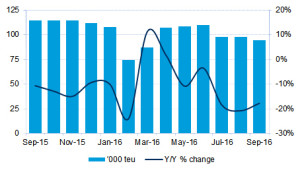 Capacity rationalisation in the Asia-West Africa trade is needed in order to achieve a freight recovery, analyst Drewry has argued.
Although the third quarter is traditionally one of the strongest periods of the year, the trade saw an unexpectedly steep fall of 19% in volumes in the three months ended September 2016, representing the seventh consecutive quarter with a negative comparison.
“This trade is in dire need of capacity rationalisation, along the lines of what happened in Asia-East Coast South America, if a freight recovery is to be achieved,” the analyst claimed.
According to Drewry, the severe fall in container volumes reflects the particularly negative impact of the economic slowdown on the largest economies, with Nigeria and Angola struggling to adjust to decreased oil revenues.
However, according to Drewry carriers did not adjust their capacity and the total slots available to the market remained stable in the quarter, with missed voyages temporarily reducing the effect of larger vessels “that have been cascaded into the trade”.
“As of last month, MSC [Mediterranean Shipping Company] was operating five ships of over 10,000 teu on its Africa Express service (the largest being the 13,100 teu MSC Altair) that has helped boost the average size of ship deployed to around 5,500 teu,” a statement by the analyst read.
According to Drewry, the lack of a response on the supply side seems to point out that carriers were caught out by surprise and impacted negatively on ship utilisation and freight rates.
In the third quarter, the average ship utilisation on the Asia-West Africa trade’s southbound leg dropped to 56%, compared to 63% in the previous quarter.
Drewry argued that annual volumes in 2016 will “almost certainly beat” the 10% drop experienced last year, with a likely trade decrease of approximately 12-14%.
The average monthly Asia to West Africa traffic in the 12 months ended in September 2016 dropped by 11.6% year-on-year to 101,700 teu and the falling speed is accelerating.