Disruption on the docks 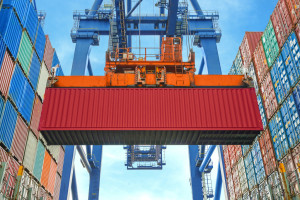 The decision about which port or terminal to use is more often driven by issues like route risk and diversification, labor strife and competing offerings by shipping lines.

The differences in target market and product benefits created not merely a gap but a chasm that could doom many technologies to failure. Products that crossed the chasm would reshape the competitive landscape and the technology would become profitable and widely distributed. In his third edition (2014), the examples have changed but the concept of disruptive technology adoption has not.
The popular press speculates as to which technologies will be disruptive in changing the competitive landscape, and which will not. Is container terminal automation a disruptive enough technology to change the competitive landscape of global trade?
Automation in container terminals is not exactly new technology, but rather has evolved as capital equipment replacements have been made; full automation tends to come only with completely new terminal developments.
The world’s first automated container terminal was developed in Rotterdam in the early 1990s. With the opening of the Delta/Sea-Land Terminal in 1993, Europe Container Terminals created, by using Automated Guided Vehicles (AGVs, to transport boxes between the berth and container stacks) and Automated Stacking Cranes (to add or remove the boxes from the stacks), the first modern automated container terminal. This fascinating and bold vision saw AGVs move boxes in a slow dance. As automation improved, new technologies made the process much faster.
By 2016, the new container terminal in Middle Harbor, Long Beach boasted ‘no more humans’ on the working terminal and truck turns of five minutes. The benefits were those initially envisioned by the ‘early adopters’ (greater efficiencies resulting in lower costs and greater unit productivity), but many more. For truckers moving boxes to/from the terminal, safety was improved. When the driver arrived at the automated terminal, they could pull the truck into position, get out of the cab, and walk to the adjacent protected driver area; the automated equipment would not unload the truck until the driver was ‘sensed’ to be in the safe zone. Instead of longshoremen on the terminal, they were now housed in comfortable, ergonomic workspaces with joysticks, and surrounded by computer screens. The port industry now has a different kind of worker doing a different kind of work with very different reasons for choosing the technologies of full automation.
In addition to a focus on safety, the Long Beach facility design also paid much more attention to the type of equipment in use. In particular, the goal of zero emissions was a key factor in ‘selling’ the technology to local community interests. Battery-driven container-handling equipment is quieter, addresses noise pollution concerns, and is generally more acceptable to a local community capable of preventing new terminal development. Given the current number of new terminals globally, it can be argued that automated container terminals have crossed the chasm.
However, existing terminal capacity is over-built in many parts of the world. In North America, trade growth is slow; consumer purchases of imported products have been dampened by a migration to a greater sharing economy, and a larger share for services in the economy. The fastest growing container trade in the world is intra-Asian trade. It is here that the business case for automated terminal investment is strongest. In North America, investments in automation will be focused more on environmental factors like air pollution, noise pollution, and worker safety in addition to the reduction in labor uncertainty.
The decision about which port or terminal to use is more often driven by issues like route risk and diversification, labor strife and competing offerings by shipping lines. Shipping line network configuration, own terminal investments, existing alliance partner investments, and availability of the cranes to service ever-larger ships are also critical factors. Much of recent investment in automated equipment at older terminals was just taking advantage of innovations when crane investment was made to achieve greater reach for wider ships.
Therefore, the reality is that changes to the economic geography of trade are less about terminal investment and more about responding to opportunities arising from the relocation of global manufacturing and distribution centers. It would be a mistake to assume that reducing the cost of moving a bottle of wine from Australia to New York by one cent, equivalent to a 10 percent improvement in transportation cost, would make a difference in the number of bottles of wine consumed and whether that wine is Californian or Australian. Reducing costs through terminal automation might trigger a review by a user of the port or terminal, but it is unlikely to be the primary factor in the competitive landscape.
Wherever the location, international trade requires long-game infrastructure investments with local impacts requiring social license for continued development. Both ports and shipping are industries currently recovering from an unprofitable operating environment, and automated equipment is not a small capital investment to finance. Therefore, while the chasm may have been crossed, the growth trajectory for adoption in the ‘early majority’ phase will be a long one; investments must have both clear business and social cases for the investors. The secondary nature of shipping as a driver of economic investment means that the terminal industry will respond to the new economic geography rather than lead the charge.”