Delivering on a stronger partnership: the EU and its six Eastern Partners agree to develop better transport links

Delivering on a stronger partnership: the EU and its six Eastern Partners agree to develop better transport links – June 2019 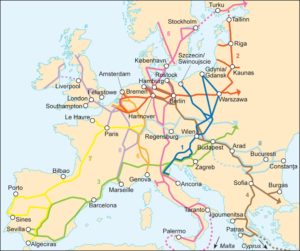 In Luxembourg, the Romanian Presidency of the Council of the European Union together with the European Commission will host the Eastern Partnership Ministerial Meeting on Transport. The event will bring together EU Ministers responsible for Transport and their counterparts from the six Eastern Partners – Armenia, Azerbaijan, Belarus, Georgia, the Republic of Moldova and Ukraine.

During the meeting, the EU and Partner countries will endorse a Joint Declaration “Eastern Partnership – Taking the Transport Cooperation Agenda Forward”. This includes the commitment to continue working together on concrete results for connectivity under the Indicative TEN-T Investment Action Plan, while upholding level playing field and good governance standards.

Commissioners for Transports Violeta Bulc and for Neighbourhood Policy and Enlargement Negotiations Johannes Hahn reconfirmed the readiness of the Commission to assist Eastern Partnership Countries in the preparation of projects and the necessary sectoral reforms.

Commissioner Johannes Hahn said: “Today, we can celebrate our joint success of extending the TEN-T policy to the Eastern Partnership. This is a milestone achievement in line with the “20 Deliverables for 2020” strategy. From now on a comprehensive and accelerated implementation of infrastructure projects should be our top priority in order to see the TEN-T extension materialise as direct benefits for citizens.”

Commissioner for Transport Violeta Bulc stated: “Enhanced transport connectivity with the Eastern Partnership region has the potential to bolster economic growth, create jobs and better connect our regions. A major step has already been achieved with the extension of  our Trans-European Transport (TEN-T) Network to the Eastern Partnership countries. Now we must focus our efforts on delivering on concrete projects. On road safety, I am convinced we can further step up our cooperation. Halving the number of serious injuries between 2020 and 2030 is an ambitious, balanced and realistic goal towards even safer roads in Europe.”

The meeting also provided the opportunity for participants to discuss the EU’s successful experience in reducing road fatalities and exchanged on equivalent measures for the Eastern Partnership (EaP), including the possible establishment of a regional EaP Road Safety Observatory.

The Ministerial meeting follows up on the joint commitment by the EU, its Member States and the 6 Partner countries, at the Eastern Partnership Summit in November 2017 to deliver tangible benefits for citizens in the region, based on a clear work plan of 20 Deliverables for 2020 in four priority areas (stronger economy, stronger governance, stronger connectivity, stronger society).

Launched in 2009 as a joint policy initiative, the Eastern Partnership (EaP) aims to deepen and strengthen relations between the European Union (EU), its Member States and its six Eastern neighbours: Armenia, Azerbaijan, Belarus, Georgia, the Republic of Moldova and Ukraine. Within this framework, all partners agreed to deliver tangible beneﬁts to the daily lives of their citizens by focusing on achieving 20 Deliverables for 2020.

In this context, in January 2019 the indicative core Trans European Transport Network (TEN-T) was extended to the Eastern Partnership. The TEN-T will focus on removing bottlenecks hampering connectivity and trade in the region and with the EU. To support the extension, the Commission published an Indicative TEN-T Investment Action Plan, which will guide investments on TEN-T projects by 2030.

The EU is supporting its six Eastern Partner countries (Armenia, Azerbaijan, Belarus, Georgia, Republic of Moldova and Ukraine) in this by mutually agreeing on the priority transport links to be developed, by providing financial support for infrastructural investments and fostering institutional reforms and legal approximation. Aspects such as road safety, environmental sustainability and use of new technologies are an integral part of the connectivity agenda in the Eastern Neighbourhood.