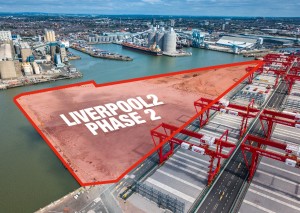 The second phase of a GB£400m investment to create a deepwater container terminal at the Port of Liverpool that will accommodate larger vessels has begun.

Peel Ports Group, owner of the Port of Liverpool, confirmed phase two of Liverpool2 will include the installation of three ship to shore cranes (STS) and 10 cantilever rail mounted gantry cranes (CRMG), enabling the terminal to manage the unloading of two 380m vessels simultaneously.

Mark Whitworth, CEO of Peel Ports, said: “This is an important step in the development of Liverpool2 and reflects our confidence and our long term commitment to positioning the North of England as a competitive route to international markets and a major port for global trade.”

Additional reefer points will be installed as part of the development to allow the terminal to handle greater quantities of refrigerated containers.

Mr Whitworth said phase two is expected to be completed by 2019 and confirmed Peel Ports is in the process of preparing the outline designs and aims to appoint construction partners in Spring 2018, to begin work as soon as possible.

The new developments will add to the five STS cranes and 12 CRMG cranes installed as part of the first phase, opened in November last year.

The terminal is expected to help connect road, rail and canal networks in the UK and Peel Ports announced earlier this year that it had secured over 200 signatories for its Cargo200 initiative – a campaign calling on importers and exporters whose goods are destined for the North of England to switch delivery of ocean-freight from south-east England ports to the Port of Liverpool.