Cruise industry | benefits and impacts on the surroudings 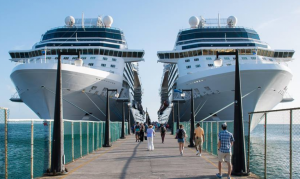 n 1972, Carnival Cruise Lines introduced the concept of the “Fun ship” involving the promotion of cruises as mass tourism. In the 1980s, the cruise industry introduced to its fleet, giant passenger liners capable of carrying in excess of 2,000 passengers. The design of these mega vessels, with all the amenities of magnificent, all-inclusive, floating hotels, fully established the marketing of the shipboard experience as the main selling point for travelers, rather than the attraction of the ports of call (Ajagunna et Pinnok).

The presence of big and mega ships in ports has continued to increase over many decades. We must then question ourselves over one matter: what are the pros and cons of this phenomenon from the social, economic and environmental point of views? Let’s try to analyze some key aspects in the interrelationship between cruise ships and cities.

The cruise sector constitutes one of the fastest growing sectors of the tourism industry. With the continued growth of the industry comes the need to develop new ports to accommodate the increased volume of ships as well as the increasing size of modern cruise ships. Given the size and volume of the industry, it is important to understand how the development of new cruise ports impacts the local community. The social, cultural, economic and environmental impacts of tourism developments on the residents of host communities (whether beneficial or not) should be understood.

Although tourism development can bring positive economic benefits, it can also create negative economic impacts. Negative economic impacts resulting from tourism development can include increased land and housing prices, higher taxes, and inflation levels. Cruise visits seem to have considerable potential as a source of economic development for coastal communities. The initial reaction is therefore likely to be positive – as with other tourism proposals, when cruise visits are proposed. But, on the other hand, as with all development initiatives, cruise tourism brings both potentially positive and negative impacts. Communities seeking new or enlarged cruise visits should carefully consider a number of factors. Because of the nature of the cruise sector, particularly for smaller communities arrival of cruise ships and their passengers may stimulate or require considerable change, and this change may involve the entire destination and its communities.

All stakeholders need to become involved early in the process, to ensure that all the values and concerns are addressed, and to delineate the negotiation position to be taken in dealing with cruise lines and other partners. While the decision to seek cruise ship visits will be led by community/political leaders, there are many potentially involved and affected. According to Manning (2006) using a participatory process to consider cruise tourism development or expansion as well as involving all of the stakeholders is paramount.

Several impacts relate to the environment. As evidenced by Moodie A. (2016), many large ocean liners run on giant diesel engines, which can stand at more than three stories tall and span the length of two school buses. This equipment, along with smaller auxiliary engines, can emit dangerous levels of sulfur dioxide. Curbing these emissions could prevent 14,000 premature, air pollution-related deaths and save the US $110bn by 2020.

Despite the disaster of the Costa Concordia near the island of Giglio (Italy), cruises are becoming increasingly popular, coming to carry each year about 20 million passengers worldwide and 800,000 in Italy.

But it is also the model of vacation most polluting, one of those who has a higher incidence in the total CO2 production in the tourism sector, and that is guilty of the destruction of marine systems. The U.S. EPA estimates that a 3,000-person cruise ship generates 210,000 gallons of sewage weekly — enough to fill 10 backyard swimming pools, and 1 million gallons of graywater — another 40 swimming pools full of waste. One cruise ship equals 50 swimming pools full of highly polluted waste which can be dumped into our oceans each week! Cruise ships are also responsible for significant air pollution from the dirty fuel they burn, which can lead to serious human health problems, especially in port communities. Even while at dock, cruise ships often run dirty diesel engines to provide electrical power to passengers and crew. Emissions from cruise ship engines include nitrogen oxides, sulfur
oxides, carbon dioxide, and diesel particulate matter, the microscopic soot that is so damaging to human health.

As can be seen, the impact of cruise tourism on cities is ambivalent: while it encourages growth and tourism, is certainly a damage for the environment of local communities unless urgent environmental measures are taken