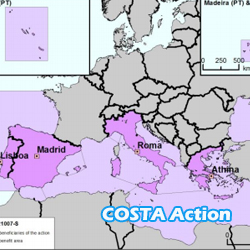 The COSTA Action aims at developing framework conditions for the use of LNG for ships in the Mediterranean, Atlantic Ocean and Black Sea areas. It will result in preparing an LNG Masterplan for short sea shipping between the Mediterranean Sea and North Atlantic Ocean as well as the Deep Sea cruising in the North Atlantic Ocean towards the Azores and the Madeira Island. The feasibility study results will promote Motorways of the Sea sustainability, contributing to the common effort addressing climate change, in particular in view of the forthcoming requirements with respect to the implementation of the requirements of Annex VI of the MARPOL Convention.

The project will complement the results of the on-going LNG North Sea and Baltic project 2010-EU-21112-S. This will all increase the potential of Motorways of the Sea by lowering transport costs and reducing CO2, NOx and SOx emissions, in conjunction with greening the transport corridors and using of LNG as an alternative to marine bunker. If COSTA’s policy recommendations are implemented, it is expected that CO2 emissions from shipping could drop by 25% in 2020 and by 50% in 2050. For the air pollutants the use of LNG would eliminate SOx and reduce NOx by 90%.