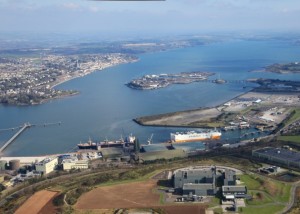 A floating storage and regasification unit (FSRU) and liquefied natural gas (LNG) import terminal infrastructure will bring the cruise industry to the Port of Cork.

The technology will enable the growing number of LNG and duel-fuelled cruise vessels to call in at the port at the start or end of a European trip.

Michael McCarthy, captain of the Port of Cork and chairman of Cruise Europe, which represents 128 member ports in north west Europe, said: “The beauty about an FSRU located in Cork and the Port of Cork is that it is on the approach into Europe for many of the cruise lines at the beginning and end of the season before they relocate. We’re ideally placed to have an LNG bunkering type service in the port.”

The FSRU and LNG import terminal developments are the result of a deal between the port and US LNG development company NextDecade. The planned FSRU will be supplied with LNG sourced from NextDecade’s proposed Rio Grande LNG export facility at the Port of Brownsville in South Texas.

FLEX LNG will be supporting NextDecade to provide a fully integrated regas import solution for the LNG terminal.

Once installed the port expects to see an increase in cargo volumes as well as towage, pilotage and mooring services.

The developments will also benefit the pharmaceutical and agricultural business, which have a heavy presence in the region.

The development could harness local gas to diversify supply at competitive prices, while Mr McCarthy pointed to security of supply as another benefit of partnering with NextDecade.

He said the security of accessible energy is crucial for industrial areas in the south of Ireland. He added that pre-Brexit and certainly post-Brexit, being able to export fuel back into the UK should the need arise is an important option.

He added: “I don’t think every port needs an LNG refuelling facility. We would be ideally located to supply bunkering services for LNG for the likes of Dublin, Belfast, Liverpool, all around the Irish sea and Ireland. That is part of our feasibility plan going forward.”

NextDecade and FLEX LNG have completed a visit to the proposed development site at the port; the west of Whitegate Jetty and inside Dognose.

The Port of Cork have confirmed that no start date for the project has been established.Cork LNG terminal will attract more cruise business