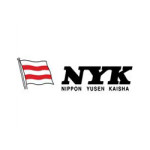 Nippon Yusen Kabushiki Kaisha (hereafter, “NYK Line”) announces today that it has revised its forecast of consolidated financial results for the fiscal year ending March 31, 2017. Differences between figures in the revised forecast and previous forecast announced on April 28, 2016, are shown below.
Revision of Forecasts of Interim and Full-Year Consolidated Financial Results

Differences between the revised forecast and previous forecast of interim financial results (April 1, 2016 to March 31, 2017)

Assumptions underlying forecasts:
Average annual exchange rate of ¥106.53 / $US (revised); ¥110.00 / $US (previous)
Average annual bunker oil price of $228.16 per MT (revised); $200.00 per MT (previous)
Reason for Revision:
In the container shipping market, the oversupply of new ultra-large container ships is continuing unabated, and a recovery in freight rates will require a certain amount of time. In the dry bulk shipping market, the pace of the recovery has been slower than previously expected. In addition to the outlook above, the yen will be appreciated which will affect exchange rates, and the price of bunker oil will rise slightly. Owing to these and other factors, NYK Line expects its operating environment to remain severe from the first quarter of the fiscal year ending March 31, 2017. Having considered this outlook, management revised its interim and full fiscal year forecasts of consolidated financial results, as shown above.

The forecasts of financial results shown above are based on available information and certain assumptions deemed reasonable by management at the time of preparing this announcement. Accordingly, NYK Line makes no guarantee of these forecasts being realized, as actual results may differ widely owing to various factors.