A new system for detection of unremoved container cones has been rolled out at a South Korean terminal to enhance safety. 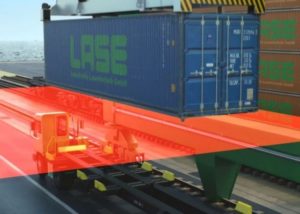 When a container is hoisted from the truck chassis by the yard crane it passes the scan plane where the profile of the container is scanned. Image: LASE

PNC terminal at Busan Port recently implemented LASE’s system, which detects whether container cones (twistlocks) are still connected to the container while being lifted up from terminal chassis by RMG or RTG cranes before they are moved into the yard. The system also detects open doors of containers. Following a successful trial, the terminal has ordered 69 systems from LASE.

Jason Hwang, engineering team leader at PNC, said: “It was a great cooperation between LASE and PNC. From discussing the idea with LASE as well experienced laser measurement solution provider, over to creating a common project to qualify the solution within an extensive trial and up to the final decision of implementing such kind of system in our complete fleet of Automatic RMGs. It’s well engineered system and we’re looking forward in preventing the safety risk in our terminal!”

If any obstacle underneath the container protrudes from the container, it is an indicator that one or more cones are still connected to the container. In both cases the application software sends an alarm signal to the PLC in order to stop the crane hoist move and to undertake a visual inspection of the detected container issue.

Hoist moves with skew, tilt or trim angles of the container under the spreader do not have any influence on the reliability as well as the container type (20, 40 or 45ft) or the different cone design.

The system is highly recommended for automated yards, where crane drivers do not need to observe the process anymore.