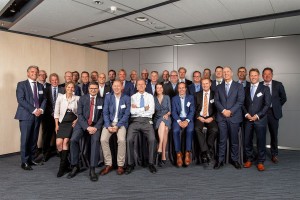 Dutch, German and Swiss representatives of shippers, freight forwarders, barge operators, inland terminals, container terminals operators and shipping lines representatives drawn up constructive agreements to ensure a more efficient handling of inland container shipping through the whole supply chain, to and from Rotterdam. Over the coming period, these organisations continued working in several groups on possible solutions to the bottlenecks they identified jointly, of which some look into solutions on the very short term and others analyse the whole supply chain. The Port of Rotterdam Authority agreed to facilitate the further elaboration of these plans in follow-up discussions. In addition, the Port Authority made €3 million available to fund initiatives from the market that could make a contribution in the short term.

At the invitation of the Port of Rotterdam Authority, all the stakeholders met in Rotterdam for the first time on Friday, 8 September to discuss the various signals received in recent months about increasing waiting times. Each year, over 12 million container units are handled in the port of Rotterdam, around three million of which arrive and leave on inland vessels.

Allard Castelein, CEO of Port of Rotterdam Authority: “I am delighted that today we have had a very positive and constructive discussion with all organisations involved. It gives us great hope to note that there is a willingness among organisations to continue to put the importance of fast and efficient handling first in the changing and competitive container market. It is essential for everyone involved to realise that container handling benefits from a smooth-running logistics chain.”

Plans
The representatives of shippers, freight forwarders, barge operators, inland terminals, container terminals operators and shipping lines expressed their concerns about the current situation and indicated what they felt could be done towards improving the handling of inland shipping. At the meeting, the Port of Rotterdam Authority outlined the initiatives that are already being adopted by the market in order to improve the situation. For instance, the Port Authority is working on a link between the container terminals on the Maasvlakte which will enable the straightforward swapping of containers. The Port Authority is also working on digital solutions that will provide better insight into the availability of inland shipping capacity and a greater ability to match cargo and capacity to each other.

Signals
The meeting followed various signals about increasing waiting times for inland container shipping. A number of inland operators and transport organisations in the Netherlands and abroad had raised their concerns about what they considered to be overly long waiting times in Rotterdam and Antwerp.

In recent months there have been periods in which due to a range of circumstances, the waiting times for barge traffic rose to above-average levels. For instance, the Rotterdam container terminals had seen strong growth in throughput during the first half of the year whilst having to adapt to the alliances’ new sailing schedules, among other things. A cyber attack on two terminals meant that hardly any containers could be loaded or unloaded for one and a half weeks.