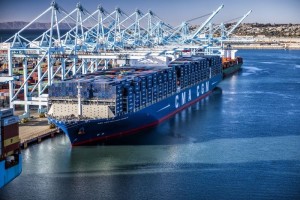 As a result of the current Transpacific market situation and in order to optimise the use of its fleet, the CMA CGM Group has decided to postpone its project to deploy 18,000 TEU-capacity vessels on this trade, according to a company press release.

This follows an announcement by the carrier that it was looking to deploy six mega-ships of 18,000 TEU to the US West Coast as part of a weekly service.

The carrier has recently announced that it has signed a deal with three other major carriers to form a mega East-West shipping alliance.

This could cause more problems for global ports and terminals who struggle to service increasing amounts of containers.

With the total fleet now reaching more than 20 million TEU, the overcapacity in the industry is at a point where the vessels needs to adopt higher levels of capacity management and scrap idle ships.

As well as overcapacity, simultaneous ship calls are an issue, and may require ports along the US East and West Coasts to ramp up infrastructure.

The US West Coast is already looking at automation as a logical reaction to the higher number of ships, since it can increase safety and reliable of a port.