EU policyeu transportMotorways of the Sea 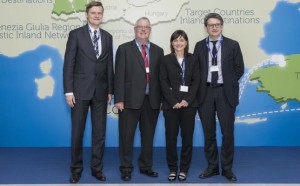 Three pillars govern the European Motorways of the Sea policy. What Brussels is mainly focused on is the environment: supporting the technology that makes it possible to reduce emissions and develop the network of terminals and facilities that will allow for the use of alternative fuels like LNG. And forty projects in that environmental category are ready, from the development of scrubbers – catalytic mufflers on ships – to units powered by electricity. “We have already committed almost the entirety of the funds set aside,” Wojciech Sopinski explained. Sopinski is advisor to Brian Simpson, the EU coordinator of Motorways of the Sea.

And it was those two representatives from Brussels who officially opened the work of the conference in Trieste, which was organised by The MediTelegraph, the Port System Authority of Trieste and the Region of Friuli-Venezia Giulia, on the development of the European transport networks, and therefore also of short sea shipping.

The other two pillars indicated by Brussels are based on the integration of the logistical chain – Europe promises almost €400 million – and on safety, with investments worth nearly a billion euros: “We are doubling down on safety on board ship and at the terminals,” Sopinski added. Certainly the budget for the two year period 2016-2017 has been “reduced: in total there is 100 million, while in 2015 it was 280 million and in 2014 we reached 350 million,” he explained. Trieste is the European gateway port for traffic, namely RO/RO ships, headed to Germany from Turkey.

But these volumes of traffic are not only important for Trieste and for the “bridge” across the Adriatic, “but rather they are essential for Italy as a whole: semi-trailer traffic is still considered second class, but this judgement is mistaken: last year the volume of trailers exceeded containers for the first time,” Zeno D’Agostino, the President of Trieste’s Port Authority pointed out.

It means that there are fewer lorries on roads across much of Europe, since they have embarked on ships instead – RO/RO ships – rather than make the entire journey by land. And after the ships’ arrival in port, the green voyage continues: “We handle 7,700 trains per year,” D’Agostino continues, “we increased the proportion of goods that travel by rail by 28% in the last year alone. In two years we have increased it by 68%.” Some terminals in Trieste have a rail freight rate over 80%. “Let me say even more: based on this aspect of our traffic, our rail freight rate plus the results from Koper, we could have a better result than Rotterdam.” Trieste already feels it is a competitor to the Northern Range ports, but it needs an alliance with Koper: “We must seek collaboration with them. Of course it is complicated when the rules and the units of measurement are different in our two ports. But we must find synergy, and with Rijeka, as well. We’ll get there,” said Regional President Debora Serracchiani.

This is how Trieste is preparing for the future: “We already have it laid out,” D’Agostino said, “with the connection to Servola in 2018 we will reach a capacity of almost 800,000 TEU, in 2020 there will be further investments and the capacity will reach 1.2 million TEU. Our goal is to reach two million TEU capacity on our rail infrastructure by 2025.”