Civitavecchia – New jetty for the motorways of the sea: work is progressing rapidly 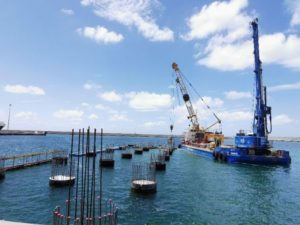 Despite the Covid19’s detention, the infrastructure ready in early 2021

Civitavecchia – The poles of the first deck of pier number two have been completed; the prefabrication of the reinforced concrete elements that will be placed right on the poles has begun. This is the progress of work on the new dock of the ferry dock as part of ”BClink: MoS for the future” the project co-financed by the European Union with a substantial grant of 2.2 million.  The Consorzio Stabile Grandi Lavori and the Consortium Member Company R.C.M. Costruzioni S.r.l. resumed work rapidly at the end of April following the blockade caused by the health emergency and in conditions of total safety.

In fact, the ADSP, together with the Works Management, provided the companies with the necessary indications for the implementation of the safety measures required by the recent regulatory updates for the containment of the Covid-19 epidemic.

In the past few days, the President of the Port Authority System of the Northern Tyrrhenian Sea, Francesco Maria di Majo, wanted to visit the shipyard and see for himself the progress of the works. In the occasion they were present the honorable Claudio Mancini, the president of the Port Company, Enrico Luciani and his deputy and town councillor, Patrizio Scilipoti.

“The jobs are resumed and it proceeds expeditiously – underlines di Majo – with the enterprise that has recovered, in the times of construction, how much lost because of the coronavirus. In the first months of next year, our port will have this new important infrastructure whose realization is, today more than never, fundamental in order to answer to the further development of the traffic Ro/Ro and Ro/Pax. This, however, not only on the Civitavecchia-Barcelona “route”, which is increasingly competitive due to the important investments made by the shipowner Grimaldi in terms of environmental advantages but also, by virtue of the promotion activity that the Authority is carrying out for the activation of new commercial maritime lines essentially towards the southern shore of the Mediterranean”.