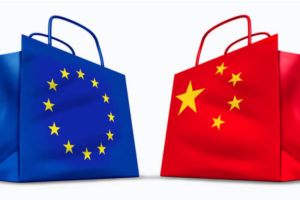 The Chinese bank ICBC has opened a subsidiary branch in Vienna, ICBC Austria Bank GmbH, operating as a financial bridge to promote business between Austrian and Chinese businesses in sectors such as advanced manufacturing, energy conservation and environmental protection, technological innovation and winter sports industry.

It will also promote cooperation between the two countries under the Belt and Road Initiative (new Silk Road) and the cooperation mechanism between China and the Central and Eastern European Countries.

Austria’s role in the new Silk Road is centred on its railway operations, with direct overland links to China, and developed connections with Mediterranean ports such as Koper in Slovenia. It is also located on the Baltic-Adriatic TEN-T Core Network Corridor, runs from the Baltic seaports of Gdansk, Gdynia, Szczecin and Świnoujście in the north, to the Adriatic ports of Koper, Trieste, Venice and Ravenna in the south.

In his speech, Kurz said in the past few years, cooperation is deepening continuously between Austria and China. A year ago, the Austrian President led a delegation to visit China, and participated in the Second Belt and Road Forum for International Cooperation. China is Austria’s biggest trading partner in Asia and the second largest market behind the EU.

Statistics show that the bilateral trade volume between China and Austria reached a record $9.75 billion in 2018, a year-on-year increase of 16.2%. Among them, China’s exports to Austria were $2.83 billion, an increase of 11.9%; China’s import from Austria were $6.92 billion, increased by 18%. In terms of bilateral investment, direct investment to Austria by Chinese enterprises was $190 million in 2018, bringing the total amount of investment from China to Austria to over $1 billion. Austrian enterprises invested USD150 million in China directly in 2018, an increase of 53%, and the accumulated investment by Austria in China reached $2.14 billion.

Industrial and Commercial Bank of China Limited, headquartered in Beijing, was established on 1 January 1984 and has formed a globalised and multi-market business structure with commercial banking as the core, providing a comprehensive range of financial products and services.