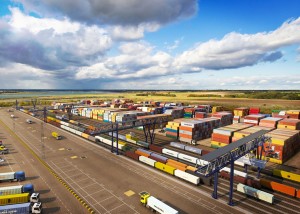 Rail capacity improvement scheme to reduce supply chain-generated carbon at the Port of Felixstowe has been government-approved.

The GB£60.4m scheme, jointly funded by Network Rail and Hutchison Ports, will allow up to 47 freight trains to run per day in each direction between Ipswich and Felixstowe.

Clemence Cheng, executive director at Hutchison Ports and CEO of the Port of Felixstowe, said: “Rail is an increasingly important differentiator as shipping lines and cargo owners look to remove carbon from their supply chains.

“The Port of Felixstowe already has the widest choice of rail services in the UK with 33 daily services to 17 different inland destinations.”

Network Rail is delivering the project and in the coming months, engineers will start clearing vegetation in preparation for building the second track.

This is the second major rail project at Felixstowe in recent years. In 2013, the port opened its GB£40m North Rail Terminal to double capacity.

The scheme took the port’s track total to 20 and Mr Cheng said that currently, over 100m HGV miles per year are saved by using rail freight from Felixstowe, a figure which the port aims to increase in the future as part of its sustainable distribution options plan.

John Smith, managing director of GB Railfreight, commented: “The Felixstowe Branch Line is part of a key strategic freight route through to the Midlands and Northwest. This new capacity connecting the Port of Felixstowe will result in increased modal shift and radically reduce the impact of road vehicles on our environment and public health.”