Call to commit to reduced emissions 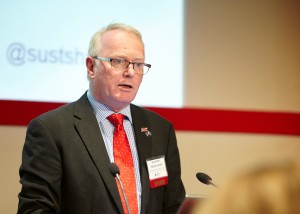 pping Initiative (SSI) has called on the IMO to show its true commitment to reduce Greenhouse Gas emissions from shipping at the forthcoming Marine Environmental Protection Committee meeting (MEPC 69) beginning on 18 April 2016.

It believes that an ambitious plan must be adopted to succeed at reducing GHG emissions in line with the UNFCCC target of less than two degrees warming agreed at the COP 21 meeting in Paris in December 2015.

To achieve this requires global GHG emissions to be at least 50% below 1990 levels by 2050, but the shipping industry’s current rate of emissions growth is incompatible with this target.

Alastair Fischbacher, CEO, the Sustainable Shipping Initiative, said: “The IMO’s latest figures show that if left unchecked, GHG emissions from shipping will increase by up to 250% by 2050, representing 17% of global emissions. This is simply unacceptable, and it is critical that the IMO urgently sets out a robust and ambitious plan and framework that sees the industry take responsibility for reducing its emissions output.”

The agreed agenda for MEPC 69 will see debate around a number of areas in relation to GHG emissions, including the development of a global data collection scheme and an emissions reduction target, as well as market-based measures to achieve such a target.

As a minimum, the SSI believes that MEPC 69 must agree a fast-tracked plan that will see the formal agreement and implementation of significant and early emissions reductions for shipping.

The SSI recently launched its Roadmap, a set of key milestones and priorities, which must be met in order to create a sustainable shipping industry by 2040. Set across six core areas, one is the requirement to reduce GHG emissions by changing to a diverse range of energy sources as well using resources more efficiently.