Boom for refrigerated containers, production up 22% 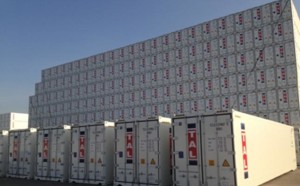 The total number of containers in circulation in the world is estimated to be about 40 million. Sales of traditional containers reached the equivalent of 736,000 TEU in 2015, (or +17.7%). It is a market that seems to have escaped the economic crisis, and likewise in the refrigerated container sector, which reached the figure of 87,000 TEU last year, or +22.9% growth over the preceding twelve months. A study by the company Persistence Market Research described the rise of this sector: according to the specialists, to get into the particulars, the industry producing new containers reached an absolute value of over €8 billion, and the forecasts, from now until 2021, show an additional growth of several percentage points, which will bring the sector’s revenue to over €11 billion. Balance sheets, which are more than positive for the majority of companies that produce containers are confirming the positive moment for the sector. One of these, Marine Container (CIMC) ended 2015 with profits up by about 40% compared to the previous year, while the Singamas company, which recorded profits lower than 2013 in 2014, ended 2015 in the black. On the shipping company front, on the other hand, Maersk Line continues to be the largest line in the world in terms of capacity according to data from Alphaliner. The Danish carrier has 3.01 million TEU of total capacity and 584 ships in its fleet. MSC, which ranks second and is a member of the 2M alliance, has 484 ships and 2.67 million TEU of capacity. Maersk saw its fleet increase by 4.1% in 2015, while MSC showed a 5.2% increase with 43 new ships ordered for another 572,720 TEU when the ships are delivered. Maersk also has 31 ships on order for a 405,910 TEU increase in capacity. The Danish company has reduced its presence on routes between East Asia and Europe, because of the alliance and vessel sharing agreement with MSC. Alphaliner’s calculations suggest that Maersk has reduced its capacity on that route by 26%, a reduction in capacity of 670,000 TEU. That’s compensated for on the route between North America and Asia, where the group’s ships increased by 24%.

But now Maersk’s investment in trade between North America and Europe is even larger: the increase in capacity was 223%. Despite the reduction on the East Asia-Europe route, there is still a risk of overcapacity for the Danes. The latest unit to be stopped is the Maersk Munkebo (18,340 TEU), which is anchored off China to remedy problems of overcapacity and low demand. The percentage of Maersk’s ships that are rentals, on the other hand, is the lowest of the major international carriers. Only 41% of the Maersk fleet is chartered in, versus 61% of MSC’s fleet and 67% of CMA-CGM’s. The third largest line remains France’s CMA-CGM, which has seen its fleet grow by 11.1% over the course of 2015. Its total capacity is 1.82 million TEU with a fleet of 460 ships plus another 85 once the acquisition of APL is complete, adding another 535,000 TEU to the fleet. Among the 100 largest container ports in the world, according to the ranking created by the analysts at Container Management, there are three Italian ports, Gioia Tauro, Genoa and La Spezia. Asian ports dominate the top 100 list, in particular Shanghai and Singapore, which have reached very high figures compared to those recorded at European ports. The largest port in Europe only comes in eleventh, and it’s Rotterdam, followed by Hamburg (15th) and Antwerp (16th). Appearing a bit further down the ranking are Bremerhaven (24th), Algeciras (31st), Valencia (34th) and Felixstowe (36th).