Biodiesel increasing EU transport emissions by 4% instead of cutting CO2 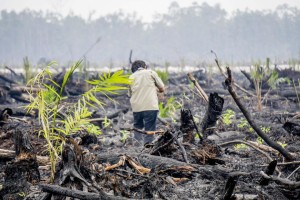 The EU’s policy of using biodiesel for transport is set to increase Europe’s overall transport emissions by almost 4% instead of cutting CO2 emissions, according to a new analysis of the European Commission’s latest study on biofuels. These extra emissions are equivalent to putting around 12 million additional cars on Europe’s roads in 2020, the analysis by T&E finds. These findings take into account the EU’s 7% cap on the contribution of biofuels produced from food crops.

The EU’s figures show palm and soy-based biodiesel have land-use change emissions that alone exceed the full lifecycle emissions of fossil diesel. Land-use change emissions occur when new or existing cropland is used for biofuel feedstock production, thereby causing carbon sinks to be opened. The Commission delayed publication of the so-called Globiom study by more than six months; it thus was too late to be a useful source of information for a public consultation on a new Renewable Energy Directive.

T&E’s analysis adds to Globiom’s figures the direct emissions of biofuels – for example, from tractors, fertilisers, and the installations – and subtracts emissions from the fossil alternative.

It finds that on average, biodiesel from virgin vegetable oil will lead to around 80% higher emissions than the fossil diesel it replaces by 2020. In the cases of soy and palm, biodiesel for these feedstocks is even two and three times worse respectively. Biodiesel from virgin vegetable oil is the most popular biofuel in the European market and is expected to have an almost 60% share in 2020 under the current EU biofuels policy.

Jos Dings, T&E executive director, said: ‘The European Commission has finally revealed that Europe’s policy failure in stimulating bad biofuels is even more spectacular than previous scientific research indicated. We should phase out the mandating, subsidising and zero-carbon accounting of these fuels at European and national level after 2020.’

In total almost two-thirds of biofuels, which includes bioethanol as well as biodiesel, are forecast to have lifecycle greenhouse gas emissions – including Indirect Land Use Change (ILUC) emissions – similar or higher than fossil petrol and diesel in 2020.

In 2015 EU policymakers set a limit on the growing consumption of land-based biofuels, which, because of ILUC emissions, often increase carbon emissions rather than reducing them. But the reform failed to include ILUC emissions in the carbon accounting of biofuels under the Renewable Energy Directive (RED) and Fuel Quality Directive (FQD), meaning harmful biofuels can still be counted toward the EU energy and climate targets and receive public financial support.

Jos Dings concluded: ‘The cure is plainly worse than the disease. The 7% cap on food-based biofuels has helped though, and should be lowered to zero after 2020. These fuels should also not count as zero-emission fuels. If we do not end incentives for bad biofuels, the better ones will not stand a chance.’

The European Commission is currently reviewing the RED and sustainability criteria for all bioenergy including biofuels, and it will publish a proposal in the final quarter of this year.