Belt and Road: Amsterdam Port to Connect to Shanghai 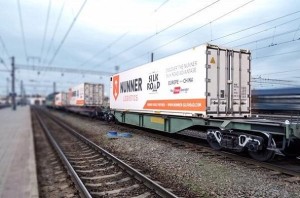 Port of Amsterdam in the Netherlands has announced that it will be part of the Belt and Road Initiative from March 2018.

Once construction on a railway connection is complete, a direct route will see containerized cargo flow between the Chinese city of Yiwu in the Shanghai region to Amsterdam.

The first train to China is set to leave on March 14, 2018, from the TMA terminal (ACT Terminal) in Amsterdam’s Amerikahaven port, which is working in partnership with Nunner Logistics — a logistics service provider that will act as an expeditor.

China’s Belt and Road Initiative plans to revive the ‘Silk Route’, which started out as a network of caravan routes through Central Asia, by investing and encouraging funding into connecting global trade between the East and West.

In a statement about the new development, Koen Overtoom, Port of Amsterdam CEO, said that the new connection would serve as a “valuable extension of the multimodal transport services currently available in Port of Amsterdam”.

He added: “This dedicated connection will provide permanent access to a vast and remote hinterland, which is really unique.

“It will cement our already strong position as a European logistic hub and will enhance our short-sea connections to Britain and Scandinavia.”

Nunner Logistics is an agent for the Austrian-based Rail Cargo Group, the second-largest railway transport company in Europe.

Both logistics services providers are working in association with the TMA terminal and are using it for the storage and transhipment of all types of cargo, including steel to be transported to the hinterland by rail, barge and truck.

Used for many centuries as a trade route between China and East Asia on one side and the Middle East and Mediterranean on the other, the new Silk Route, which spans a total of length of 11,000 kilometres of railroad, runs from the Chinese mainland to Europe, traversing Mongolia and Russia.

The route ceased to exist in the Middle Ages, when land-based trade gradually shifted to transport by sea, and owes its name to the lucrative silk trade, which emerged during the Han Dynasty between 206 BCE and 220 CE.

In a statement about the new development, Port of Amsterdam said: “The railway link is a perfect opportunity to provide logistics customers access to a massive hinterland.

“The connection is faster than by ship and more affordable than by airplane.”