“BClink: MOS for the future” project; an integration between the logistics chains of the ports of Civitavecchia and Barcelona

In December 2017 a co-financing was granted by the European Commission for the “BClink: MOS for the future” project, for an integration between the logistics chains of the ports of Civitavecchia and Barcelona. 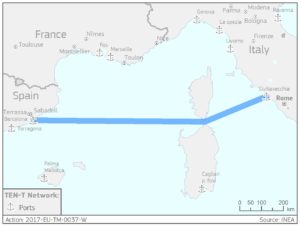 The project, included in the context of the Motorways of the Sea, had an initial value of 21 million euros, financed for 2.2 million in repayment for only the Italian port. In July 2019 a Memorandum of Understanding has been signed between the Port System Authority of the Northern Central Tyrrhenian Sea (Civitavecchia) and the Barcelona Port Authority, strengthening relations between the two ports.

Circle S.P.A, thanks to its international experience and the expertise gained in managing European projects, supports the Port System Authority of the Northern Central Tyrrhenian Sea for the whole communication of the project through several actions including the creation of the logo, a dedicated newsletter to be sent to more than 2,000 stakeholders of the sector and the organization of a specific event. “BClink: MoS for the future” – co-funded by the European Commission in the framework of the “Connecting Europe Facility” (CEF) – aims to improve and implement infrastructures in both ports and thus enhance the capacity of the respective facilities, by land and sea.

Thanks to BClink, is started in Civitavecchia the construction of a new wharf with two new moorings for Ro-Ro ships, while in Barcelona the Contradique wharf, currently used for solid bulk cargo, will be destined for the Motorways of the Sea. The second objective of the project is to facilitate the construction of a new intermodal TEN-T corridor able to connect Spain and Eastern Europe, as well as the ports of the Adriatic coast and Greece.