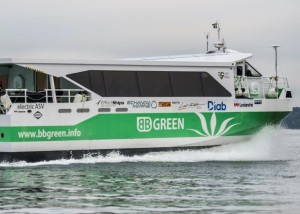 The Green Fast Ferry (GFF) will cut some of the emissions associated with usual diesel high speed ferries and it will eliminate operational emissions as the vessel is set to be propelled solely on renewable electric energy.It will be suitable for a large number of inland and costal routes and is a project driven by the European Union with new emissions legislations coming into force in several countries.The vessel features a new Air Supported Vessel (ASV) hull which was developed and patented by ESI then tank-tested by SSPA Sweden. A purpose-built lift fan feeds a well enclosed air cavity underneath giving the vessel 80% air support and reducing wetted surface areas to a minimum.GFF has a new, electric, contra rotating pod propulsion which has been developed specifically for the project. The Volva Penta prototype delivers efficiency from low to high speed and aims to reduce the need for a bow thruster.Swiss-based company Leclanche is responsible for the green battery. A study which was conducted by the BB Green project concluded that the Lithium Titianate Oxide (LTO) was the most suitable battery.The LTO battery will be able to withstand the tough use, the number of cycles and the fast charging demands of the vessel.Demonstrations of the GFF are set to start in Stockholm in March this year.