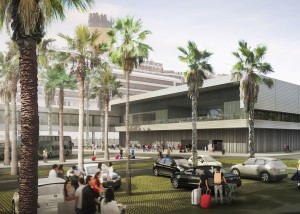 Carnival Corporation & plc has released artist renderings of its second cruise terminal at the Port of Barcelona, which will be Europe’s newest LNG cruise terminal when it opens in 2018.

The terminal is designed to accommodate Carnival Corporation’s new class of next-generation green cruise ships that will be fully operated by LNG.

Sixte Cambra, president of the Port of Barcelona Port Authority, added: ”This terminal marks the culmination of years of partnership.  Ten years after the opening of the first terminal, this has materialised in a new facility for their cruise brands.”

As part of an agreement signed back in July 2015, Carnival Corporation will construct and operate the new 12,500 square metre terminal.

The company is investing more than 30 million euros in the state-of-the-art terminal, which paired with its existing terminal at the port represents its largest combined terminal investment in Europe.

Beginning April 2018, the new terminal on the port’s Adossat wharf, will host inaugural sailings of Carnival Horizon, Carnival Cruise Line’s newest ship, as well as Aida Cruises’ newest ship AIDAperla, which is one of the world’s first cruise ships to feature dual-fuel engines.

Carnival Corporation’s deployment of LNG-fuelled ships to the port supports the pioneering Air Quality Improvement Plan proposed by the Port of Barcelona in November 2016 to effectively reduce emissions from port activities.