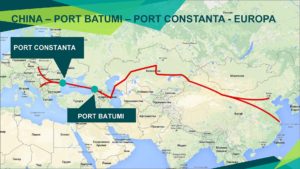 Constanta, Romania – August 27, 2019 – At a meeting of the Trans-Caspian International Transport Corridor International Association in Tbilisi, Georgia, it was agreed that the Azerbaijan Caspian Shipping Company (ASCO) will launch a trial service of a container service between the Black Sea ports of Batumi (Georgia) and Constanta (Romania).

The service will operate every 10 days and if cargo volumes, increase, so will the service frequency. The service is scheduled to start on September 20, 2019.

The line will mainly be used for the transit of goods in the directions Europe – China – Europe and Europe – Central Asia – Europe, effectively a service serving the new Silk Road, China’s economic trade policy.

This will result in the increase of the attractiveness of the Trans-Caspian International Transport Route (Middle Corridor) going through the Black Sea and the volume of transit container traffic through Azerbaijan.

The Trans-Caspian International Transport Route (TITR) combines the countries participating in the new Silk Road project and important players of the region. Its members are leading maritime and transport companies from Kazakhstan, Azerbaijan, Georgia, Ukraine, China, and Turkey. The organisation aims to popularise the middle corridor, accelerate and simplify cargo transportation procedures between Asia and Europe, and make special preferential tariffs. Between East and West, in terms of cargo, the middle corridor helps to compete with the north-south routes.

TITR allows European companies to bypass Russia, which until now sanctions the transit of certain types of goods through the country. A number of Russian entities are under sanctions from the international community following Russia’s annexation of the Crimea in 2014. The importance of this route was underlined with the inclusion of Georgia and Azerbaijan in the European Union (EU) TEN-T network.