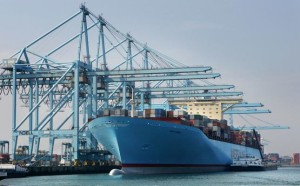 Global trade analysts with HSBC Bank have projected that industrial machinery and transport equipment will be responsible for one-third of Turkish export growth between 2021 and 2030, increasing from 29% for the five-year period of 2015 to 2020 as Turkey finds new markets for more advanced manufactured goods. “Turkey’s very ambitious plans to become one of the world’s ten largest economies will rely in part upon new and greater access to the global logistics chain, and the larger vessels serving world trade, and we are proud that APM Terminals Izmir will play a large role in that process” said APM Terminals Izmir Managing Director, Mogens Wolf Larsen. Operating under a 28-year concession agreement with Turkish petrochemical conglomerate Petkim, the APM Terminals Izmir facility will have 700 meters of quay and a 16 meter depth during its first phase of development, with the ability to expand annual throughput capacity to four million TEUs annually. The new port, which is part of the Petkim Petrochemical Complex development geared for export production, represents an investment of USD $400 million, and will create 600 new jobs in Aliaga. Following implementation and testing of the cranes and other container handling equipment, APM Terminals Izmir expects to receive its first vessel call in March 2016.