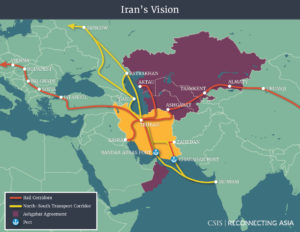 The state-owned Iran Ports and Maritime Organization (PMO) is planning a local conference to discuss ways to improve connections between the country’s port and the national railway network.

The topic is seen as a key issue as Iran seeks ways to improve trade . “The purpose of this conference is to promote inter-organizational interaction between government and private entities, and to increase the share of rail traffic in the freight transportation in the country’s ports, and Iran has taken various steps to improve trade opportunities.”, PMO’s Deputy Director Farhad Montaser Kouhsari said, reported IRIB, the state-owned news agency.

The ITI corridor was launched in 2009 within the framework of the Economic Cooperation Organization (ECO), an Asian political and economic intergovernmental organisation. Test journeys were carried out, but it has not become a stable regular service as expected customer demand did not materialise. It is now hoped that newly unified tariffs and a reliable timetable in each country will change this.

In January 2020, the sixth meeting of authorized representatives of the Caspian littoral states for discussing the draft Protocol on cooperation in the field of Securing Maritime Safety in the Caspian Sea began its work in Ashgabat.

In December 2019, Azerbaijan and Iran have agreed to build a railway between Rasht (Iran) and Astara which will be part of the International North–South Transport Corridor. The decision was taken at the 4th meeting of the Working Group on the development of the North-South Western route of the International Transport Corridor held in Baku recently.

Also in December, the head of Gilan Ports and Maritime Administration, Iran, Hamidreza Abaei, met with the management of Astrakhan port in Southern Russia to discuss possible cooperation.

Bandar-e Anzali is a city of Gilan Province, Iran, and it’s port is the country’s biggest port on the southern shore of the Caspian Sea. Astrakhan port is lies on two banks of the Volga River, close to where it meets the Caspian Sea.

Finally, in November 2019, the Ukrainian Minister of Infrastructure, Vladislav Kricliy, met with Ambassador Extraordinary and Plenipotentiary of Iran, Moradi Manouchehr, to discuss cooperation in the South-West transport corridor and how to boost freight transport by rail and sea.

Some of these trade routes use the Caspian Sea, and as a littoral state, Iran sees an opportunity to establish links with international transport corridors, such as the Trans-Caspian International Transport Route (TITR), also known as the Middle Corridor, and possibly even eventually with the European Union’s TEN-T transport network.

The latest U.S. sanctions against Iran came into effect in November 2018, and were intended to force it to dramatically alter its policies in the region, including its support for militant groups and its development of ballistic missiles. In September 2019, a U.S. official said that the U.S. will sanction whoever deals with Iran or purchases its oil.

Syria has signed in February an agreement on maritime cooperation with Iran, which reportedly includes conditions for the presence of Iranian port operators in Syrian ports and the implementation of the provisions of the Memorandum of Understanding (MoU) between the port of Imam Khomeini in Iran and the port of Latakia in Syria.

A foothold in Latakia fulfils a decades-long Iranian dream of having direct access to the Mediterranean Sea, from where it can ship goods, arms and political influence globally.  Iran, Syria and Iraq are discussing the construction of a railway line connecting Iran’s Port (Bandar-e Imam Khomeini)in the Persian Gulf, via Iraq, with Latakia port on the Mediterranean Sea. The three states, heavily affected by civil wars, sectarian conflicts, and international embargoes, are looking for ways to significantly increase the cargo flow between themselves.

Iran, which is pushing for the linking of the two ports, is to finance the railway section between the Iranian city of Shalamja and the Iraqi city of Basra, the agreement for which was signed during the visit of Iranian President Hassan Rouhani to Iraq in March 2019.

All these actions demonstrate that Iran is taking active steps to build connections with international ports and countries which are currently staging posts on new Silk Road, China’s international economic trade policy to develop rail and shipping links with Europe.