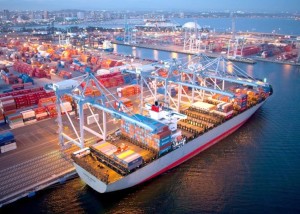 Recently awarded best seaport in North America for the second year in a row, the Port of Long Beach (POLB), aka ‘Green Port’, knows that what’s good for business, is also good for the environment, writes Lauren Riga.

The port is building off of previous programmes while looking into the future with ‘Energy Island’ and ‘Virtual Port’ initiatives. As a trendsetter in green initiatives, the port is placing an emphasis on clean technologies and green development, including LNG.

The Port of Long Beach makes up more than 3,200 acres (13 km2) of land and 25 miles (40 km) of waterfront, and moves more than 15,000 trucks and 100 trains in and out of the port every day.  A top priority for the port is reducing environmental and human health impacts of moving goods.

According to data collected from 2005 to 2012, the port cut diesel particulates by 81%, nitrogen oxides by 54% and sulphur oxides by 88%, resulting in six straight years of improving air quality in the harbour area.

The port established five goals in the ‘Energy Island’ initiative, aiming to fully provide clean electricity, alternative fuels, and renewable energy sources as the port moves toward a zero-emissions operation.  ‘Energy Island’ will be implemented in phases over 10 years.

The Middle Harbor terminal, which will operate almost entirely on electricity, is a model for cleaner seaport operations throughout the world.

Among the five goals includes a strategy to provide cost-effective alternative fueling options.  The port will explore options that include LNG as fuel for ships and locomotives, hydrogen generation, fuel cell technology and related infrastructure.

This goal builds on existing progress the port has made under its Clean Trucks Program and Technology Advancement Program to support trucks that run on LNG, compressed natural gas, and hydrogen fuel cell technology.

The City of Long Beach, CA is among the first municipalities to use liquefied natural gas (LNG) for municipal fleets and is currently expanding its use of renewable fuels, LNG and diesel, for powering 393 of its 2,185-vehicle municipal fleet.

The switch to Renewable Natural Gas (RNG) is expected to save Long Beach approximately US$276,000 annually on its usage of more than 826,000 gallons of LNG each year.

Applied LNG is the second largest producer and distributor of LNG for alternative fuel use in North America. It supplies LNG produced with renewable natural gas to customers aiming to improve their carbon footprint. It is currently building a new LNG production Plant located in Midlothian, Texas.

With an eye toward the future, the Port of Long Beach is also involved in a 10-year capital improvement programme, at a cost of US$4.5 billion. Included in this programme is the ‘Virtual Port’ initiative.

Virtual Port uses technology to provide a clear picture of the day-to-day operational activities and helps reduce operating costs by streamlining those processes.  Virtual Port is scalable to accommodate different sized operations with varying cargo requirements, such as shipments of break bulk cargo or LNG.

Port officials can also run what-if scenarios that model chemical plumes and other hazards to help agencies prepare for and better understand the impact of potential emergency situations.