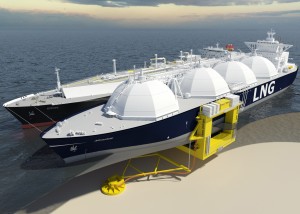 Vires decided to move forward with the project following a feasibility study that was carried out last year.

Lars Ødeskaug, who is responsible for Sevan Marine’s LNG efforts, said: “We are very pleased that Vires came to us with their regasification requirements, and we look forward to working with Vires on this ground-breaking project.”

He continued: “We believe there is a significant market for this solution, which provides clean gas as fuel for power plants and fills a niche in size below the more traditional FSRUs. We hope that the Vires contract is the first of many.”

Sevan Marine acquired the rights to the proprietary HiLoad technology for gas and LNG applications and has developed solutions for offshore loading of LNG and LNG receiving and regasification terminals based on the HiLoad Technology.

HiLoad LNG AS is in dialogue with other potential clients for similar terminals in South East Asia and Latin America.

Construction on the terminal is expected to begin later this year.