Abu Dhabi’s container port ready for next phase of expansion 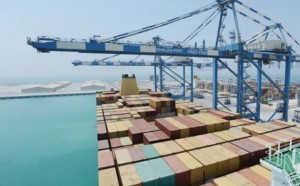 London – Port operator Abu Dhabi Terminals, announced that Khalifa Port Container Terminal is ready for the next phase of expansion and that new equipment will be added in 2016 and 2017 to keep up with demand for services. Abu Dhabi’s main container port is currently on 78% of its handling capacity and the next two years will see Abu Dhabi Terminals enhancing its operational readiness through infrastructural development to meet the expected growth of the local and regional industry. 2015 has proven to be another good year for Abu Dhabi Terminals. As the year’s end approaches, it’s forecasted that a total of 1.5 million twenty-foot equivalent units (TEUs) containers have been handled at Khalifa Port Container Terminal in 2015, up from 1.14 million in 2014. Three additional Ship-to-Shore (STS) gantry cranes and 10 Automated Rail Mounted Gantry (ARMG) cranes will be added to increase the terminal’s annual capacity and satisfy the future demand and volume growth potential. Annual throughput at Abu Dhabi’s container port will grow to 2.5 million TEUs at the completion of this phase of expansion. The facility has future expansion capabilities to grow its annual throughput capacity to 5 million TEU.