A voyage towards a zero-emission ferry fleet 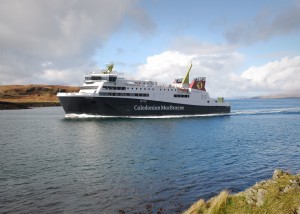 The need for cleaner and more efficient vessels, with many governments setting and striving to meet ambitious targets for emissions reductions, means that sustainable ferry technology is a growing area for the maritime industry.

Leading the way in Scotland, and possibly the UK, is Caledonian Maritime Assets Limited (CMAL), which owns the ferries, ports and harbours and infrastructure necessary for vital ferry services serving the west coast of Scotland and the Clyde Estuary.

CMAL already boasts a fleet of three electric hybrid ferries – the first of which was a world-first – and is currently building two dual fuel ferries capable of running on liquefied natural gas (LNG) and marine gas oil (MGO).

MV HALLAIG, which sailed its maiden voyage in November 2013, is the world’s first sea going, roll-on roll-off vehicle and passenger hybrid diesel electric ferry to incorporate a low-carbon hybrid system of diesel electric and lithium ion battery power.  The first vessel was followed shortly by MV LOCHINVAR, which joined the fleet in May 2014, and further Scottish Government investment of £12.3 million led to the third hybrid ferry, MV CATRIONA, which entered service in September 2016.

In addition, the team is a leading member of a Scotland-wide project, Hyseas II, aimed at exploring the extent to which hydrogen could be utilised in ferry transport.

The HySeas II project is exploring, which involved Ferguson Marine Engineering Limited (FMEL) and the University of St Andrews, the possibility of utilising hydrogen fuel cells for the power requirements on board a small Loch-class Ropax ferry design. The project found that the technologies required to facilitate this application already exist and are currently on the market.

A follow-on phase Hyseas III is now being explored which could see the testing of a scaled ship-based application using a combination of hydrogen fuel cells and hybrid vessel control system technologies.

James Anderson, director of vessels at CMAL, said: “With hundreds of ships moving around the waters of Scotland every day, it’s vital that we explore new and innovative technologies to help reduce emissions and decarbonise maritime transport, as well as a reduction in noise, vibration, maintenance and running costs.”

“Hybrid diesel-electric also offers greater benefits to the environment. The diesel engine can shut down and the lithium ion batteries on their own can provide the power to the electric propulsion system, which can help preserve the life of the engine and potentially double its service life.”

All three hybrid ferries are designed for use on short crossing routes. With a service speed of nine knots, each ferry is powered by lithium ion battery banks and small diesel generator sets, feeding power to a 400-volt switchboard, which supplies power to electric propulsion permanent magnet motors.

The hybrid ferries can save up to 35% in fuel consumption and CO2 emissions, compared with previous vessels on the routes and at the same time the hybrid ferry has substantially more vehicle and passenger carrying capacity.

The next ships on the horizon for CMAL’s fleet are currently being built by FMEL in Port Glasgow. The new 102m vessels are designed to operate on either LNG or MGO, where benefits will be gained by a marked reduction in CO2 and sulphur and nitrous oxides emissions.

The new vessels are due to be delivered to CMAL in the second half of 2018, following which there will be a period of crew familiarisation and training before entering service.

Mr Anderson added: “The LNG fuel tanks are hugely impressive and their planned delivery reminds us of the scale of the project we are delivering.  The design and build of these dual fuel vessels is a highly complex technical project. They represent CMAL’s commitment to exploring new technologies for ferries, as well as a wider commitment to innovation in Scotland and consideration for the environmental impact of transport.”

CMAL said it will continue to explore new technologies that can be used in the marine industry and continue itsdrive to a zero-emission ferry fleet.