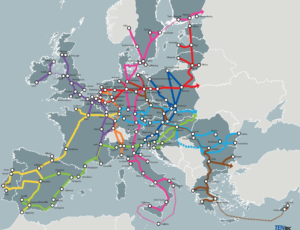 The Europe has set out a goals for its industries to become a world leader in innovation, digitalization and decarburization. These technological change is affecting on all aspects of society and transforming the lives of EU citizens. Transport is no exception to this trend. Commissioner Bulc stated the vision of a Transport Union aiming at two  priorities:  (i) promoting efficiency in the EU single market, and (ii) connectivity on a global scale. New technologies are fundamentally changing the all modes of transport landscape. Transport is a crucial for EU economy and it has a great impact on Europe’s development. Transport has an important role in EU economic growth, creating jobs, global trade competitiveness, enabling people and goods to move across Europe and beyond. However, EU has to meet the challenge to be a world leader in moving toward a low-carbon efficient transport sector.

However, from the beginning there has been problems such as gap between the size of projects and the available financing in different parts of the Europe. Currently, appears that the TEN-T programme is lagging behind the set schedule. Many of the projects are not near to being completed in time and the programme is not performing efficiently. Therefore, urgent, coherent and continuous action is needed. One of the problems lead to the project slow progress is major lack of synergy and synchronization between measures to realize the TEN-T project.

To address this challenge, an initiative offered in form of a Proposal for a regulation of the European Parliament and of the Council on streamlining measures for advancing the realization of the trans-European transport network. It addresses the most important challenges for the implementation of key infrastructure projects of the TEN-T that need to be developed according to set deadlines. It put concerns primarily on cross-border projects or the ones bridging missing links or removing bottlenecks.

Problems the proposal targeted to tackle

Experience with the implementation of the TEN-T projects of the Core Network Corridors shows that their effective implementation suffers from slow progress (delay) and lack of financing. Based on an impact assessment report published by the European Commission, there are some drivers for the mentioned two problems.

One is Complexity in permit granting, and also authorization which has led to prolonged procedures. As TEN-T infrastructure projects need conducting multiple assessments, it necessitates to achieve a high number of permits. The projects across the Europe, may go under a couple of jurisdictions at not only national level but also  regional or even  local levels. It results in duplication of efforts and prolongs the overall authorization procedure. In many areas, it is more time-consuming owing to lack of public acceptance to infrastructure projects.

Reluctance of private investors to infrastructure projects could be another reason which slowed down the TEN-T projects. It is mainly because of the delays and uncertainties in the legal framework as Public-private partnerships has not much used to contribute to the financing, procurement and management of the TEN-T projects. It has led to loss of opportunities to absorb additional investments to this area, which consequently resulted in lack of finance and considerable delay progress on the completion of the TEN-T core network.

There is legal basis for the member states to perform the TEN-T network projects The EU’s competence is set out in Article 170 and 171 of the Treaty on the Functioning of the European Union, that the EU State shall ‘contribute to the establishment and development of trans-European networks’, and furthermore `to coordinate among themselves the policies pursued at national level ` which can significantly impact on the TEN-T network objectives. It is due to the nature of the TEN-T network project. which is a transnational and cross-border.

According to the impact study conducted by the EU Commission, the followings policy options that so far have been regarded to draft the proposal. It should be noted that there is no way for any additional options to be considered:

Policy option 2: “Maximizing the impact of the existing instruments for TEN-T projects with limited binding action to be decentralized and implemented at national level.

Policy Option 3: “An EU framework for authorization of the projects of common interest”.

The best policy-option which would address the regulatory bottlenecks in the implementation of the projects would lead to socio- economic gains as the result of the infrastructure development. The most affected stakeholders are public authorities at different levels in charge of implementation of projects or enforcement of the regulations governing the investment. All the other relevant transport actors like infrastructure operators, managers, and the local people will be secondarily affected.