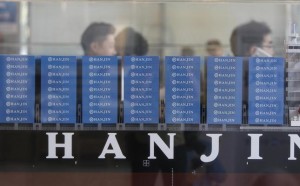 According to Business Korea, the company’s 53 vessels – 48 container ships and five bulk carriers – were stranded indefinitely or blocked from ports at home and abroad. One vessel was seized by the ship owner.

Hanjin Shipping’s 47 containers ships and three bulk carriers are denied access to ports in Sri Lanka and Vietnam, following the U.S., China, Japan and Spain, while two other bulk carriers are stranded on the East Sea and the Mediterranean. These include instances where lashing firms have refused service due to unpaid bills, or where port authorities have refused to enter or leave the port. Hanjin Shipping has failed to purchase oil in some areas due to a shortage of cash. In addition, a container ship called “Hanjin Rome” was seized at a port in Singapore at the request of the ship owner. Hanjin Shipping is likely to face a series of lawsuits worth US$14 billion (15.6 trillion won) from its customers around the world are spreading.

Korea Shipowner’s Association said that 410,000 TEUs out of 1.2 million cargos operated by Hanjin Shipping were already shipped. A total of 8,281 shippers placed orders which are worth US$14 billion (15.6 trillion won).