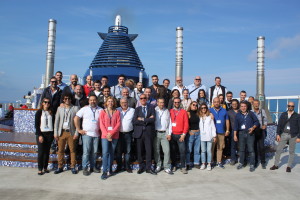 Grimaldi Lines and Centre-North Tyrrhenian Sea Port Authority are two of the founders and official sponsors of the Escola’s activities, together with Port of Barcelona, Genoa Ports and GNV.But this year, the Escola received the collaborative support of other institutions. First of all, ALIS (Associazione Logistica dell’Intermodalità Sostenibile), with which the Escola signed a collaboration agreement last July, but also RAM SpA, Assoporti and Confitarma.

During four intense days, the participants analysed intermodal solutions in depth through lectures and workshops. They learnt everything about the Motorways of the Sea, the EU environmental policy applied to transport and some topical questions like MAREBONUS and FERROBONUS tax incentives, specifically issued for the intermodal transport, and real cases of intermodal transport companies.

The aim of the training is to introduce the participants to all the benefits they can obtain by integrating the motorways of the sea as a key element of efficient and sustainable supply chains. In addition to the lectures and workshops, the participants worked hard to solve a case study and had a hands-on experience of intermodal operations, their infrastructures and equipment. Finally, they had some networking sessions to promote the development of new professional alliances among experts of the sector.
The outcome was excellent both for the organisers and the participants, who offered a very positive feedback on the experience, reflecting high levels of satisfaction.

The course was also the floor for the presentation of an innovative project that started with a book: “Il nuovo corridoio Mediterraneo” (The new Mediterranean Corridor). The project proposes a new branch of the already existing Mediterranean corridor of the TEN-T network. The authors of the book, Antonio Nervegna and Euclide Di Pretoro, could present the project, still at the embryo stage, and share it with future end-users of the transversal corridor which would connect Spain and Croatia, passing through the centre of the Italian peninsula.

The Escola has already the 4th edition of the course scheduled for 2018: from 29th September to 2nd October.
Until the end of the year, the Escola has more training courses for professionals on the agenda: for the Spanish and Portuguese market (MOST Iberia, from 21st to 24th October), the first edition of the training for Moroccan professionals (MOS Magreb, from 11th to 15th November) and another one for the French market (MOST France, from 25th to 28th November).