LNG fleet growth: what will Japan do? 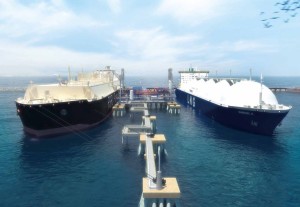 When it comes to LNG carrier fleet growth, Japan is the most exciting shipowning nation to watch. The country’s Big Three LNG shipowners – Mitsui OSK (MOL), NYK and K Line – together command a live fleet of 188 vessels, with a total capacity of nearly 27.7 million m³.
Together, the three shipowners have a hefty confirmed orderbook of 35 vessels, for delivery by the end of the decade. The 35 newbuildings will put an additional 5.8 million m³ of LNG-carrier capacity on the water. That capacity represents 21 per cent of the three shipowners’ live capacity.
All three traditionally booked new vessels to fulfil long-term supply contracts fixed by Japan’s big importers; Tokyo Gas and Chubu Electric, which now operate as JERA – the world’s single-biggest importer of LNG, Osaka Gas, Kansai Electric, Mitsui & Co, Hiroshima Gas, Inpex and, from 2018, Mitsubishi.
But the LNG shipping landscape is shifting. Japanese LNG demand is slowing. Market-watchers suspect that demand may have peaked. Many of the company’s utilities find themselves over-contracted, tied in to LNG cargoes whose delivery terms they must renegotiate to sell on that surplus to other buyers, in Asia and further afield.
As new export projects offer more flexible terms, as buyers negotiate down LNG prices, a shift has started away from 25 and 30-year contracts. That creates much less certainty for shipowners – and particularly for Japan’s conservative shipowners – against which to order new ships.
LNG World Shipping has interviewed senior managers from all three shipowners, ahead of this spring’s Gastech exhibition and conference in Tokyo. All three outlined very distinct fleet-growth strategies.
Mitsui OSK
MOL is the biggest player, with a 92-ship LNG fleet comprising 75 ships on the water and 17 on order. All 17 newbuildings are fixed against confirmed projects.
The company has slowed its plan to create a 120-ship LNG fleet by 2020, reflecting delays to project approvals and the glut in ship capacity that this has created. It sees Mozambique as its next opportunity to order conventional-size LNG carriers.
However, MOL is looking at a new shipping segment – at midscale LNG carriers in the 10,000m³-30,000m³ size range. Investing in midsize carriers will enable MOL to tap emerging-market demand, particularly in Asia and Latin America.
MOL is also the only Japanese owner – so far – to invest in a floating storage and regasification unit (FSRU). It is looking for a temporary taker for its giant 263,000m³, 4 million tonne a year (mta) newbuilding as it waits for Uruguay to reach FID on the Gas Sayago project.
NYK
NYK is conservative when buying LNGC newbuildings, yet a pioneer in LNG as marine fuel.
Japan’s second-largest LNG shipowner has a fleet of 82 vessels, 71 on the water and 11 on order. It, too, has slowed its fleet-expansion plans. The 11 newbuildings will be delivered by 2019. With no outstanding options, NYK will not now have 100 vessels by then.
NYK has been linked to talks about additional ice-class tonnage for an expanded Yamal LNG. It expects Mozambique to create demand for “at least 10” LNG newbuildings. But NYK will not order any new tonnage on spec. The same policy applies to offshore assets and small LNG carriers.
However, NYK is a first-mover in LNG bunker-supply ships. As a partner in Gas4Sea with Mitsubishi and Engie, NYK will take delivery of its first supply ship this year, a 5,100m³ newbuilding to be based at Zeebrugge. NYK is front runner to book and operate a similar ship at Yokohama in Japan. However, it expects to place its second LNG bunker-supply ship in Europe.
K Line
Last – and never least – K Line has a 49-ship LNG fleet; 42 on the water and seven on order. It has slowed its fleet-growth plans from a target of 61 by 2020. It is no more likely than its compatriots to speculate on new tonnage.
However, K Line now sees “anything from seven years” as a reasonable charter term – as long as the customer is credible. Its strategy is to seek partners – shipowners from shipping segments more used to uncertainty – with which to share the risk.
K Line’s final two confirmed newbuildings are booked against an FOB charter to BP for Freeport LNG cargoes. K Line bid for the contract in partnership with Greek shipowner Chandris.
Fleet growth will focus on so-called “unconventional LNG shipping” – which could mean redeploying older tonnage as floating storage, converting or building FSRUs, or moving into coastal carriers or supply infrastructure.
The company singed its fingertips as an early mover in floating LNG (FLNG), having briefly held an interest in Flex LNG. It will proceed with caution. It has set up a business unit in Tokyo to identify the strongest opportunities.
K Line has set its heart on diversifying and is looking for the right investment opportunity –  the question is, where and how soon?